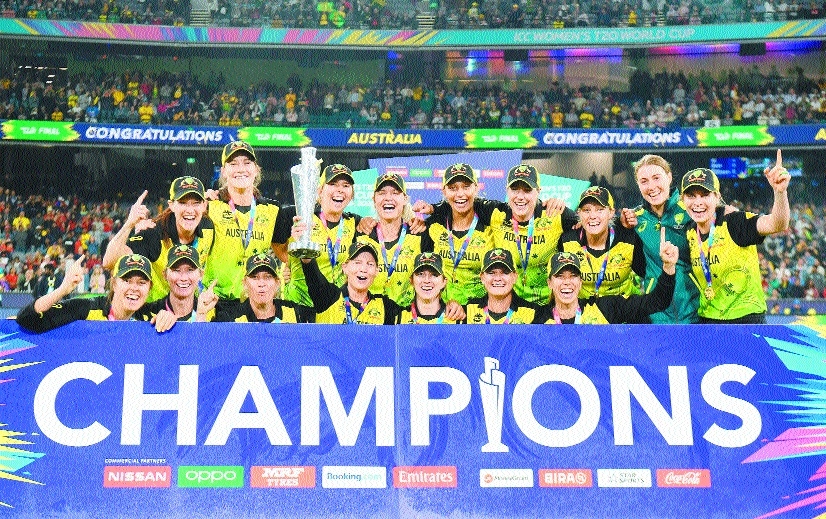 Australian players celebrate with the trophy after they won the Women’s T20 World Cup beating India in the final in Melbourne. More reports on page 11 (AFP/William West)
MELBOURNE :
ALL-ROUND Australia put on display a clinical performance to beat India by 85 runs and win their fifth T20 World Cup title in front of a packed home crowd at the Melbourne Cricket Ground (MCG) in the final on Sunday. After electing to bat first, Alyssa Healy (75) and Beth Mooney (78) slammed aggressive half centuries as the reigning champions posted 184/4 in 20 overs. Chasing a stiff 185 for victory, India were never in the chase and were skittled out for just 99 in 19.1 overs.
Deepti Sharma (33) top-scored for the visitors who cut a sorry figure as the likes of skipper Harmanpreet Kaur (4), Smriti Mandhana (11), teenage sensation Shafali Verma (2) and Jemimah Rodrigues (0) failed miserably. Besides Deepti, Veda Krishnamurthy (19) and Richa (18) scored some runs but it was never enough as the Aussies stifled their rivals from the word go and had a grip of the game all throughout. For the Aussies, Megan Schutt (4/18) and Jess Jonassen (3/20) starred with the ball.