‘Give your best in Tokyo!’ - Modi motivates Indian Olympians 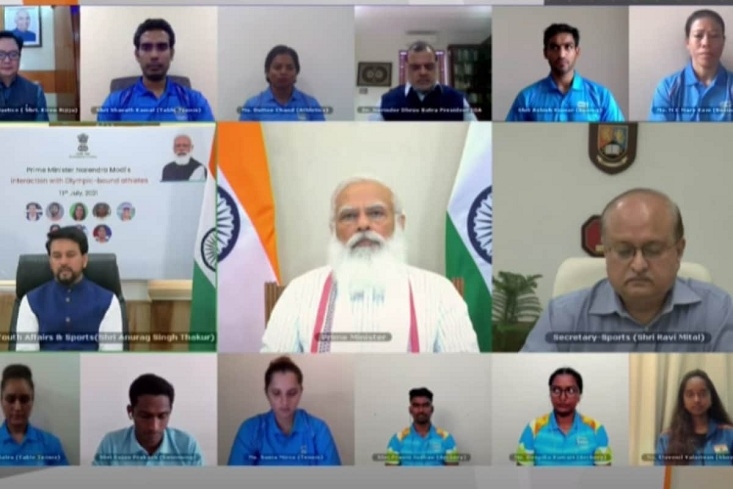 NEW DELHI :
BACK stories of struggle, sacrifices and grit dominated Prime Minister Narendra Modi’s interaction with India’s Olympic-bound sportspersons during which he urged them to forget expectations and focus only on giving their best in Tokyo. Among others, the PM spoke to iconic boxer M C Mary Kom, badminton ace P V Sindhu, talented shooters Saurabh Chaudhary, Elavenil Valarivan and veteran table tennis player A Sharath Kamal during a virtual interactive session. Well aware of their preparations and formative years, Modi’s conversations touched upon the making of their success stories and also some fun queries like the one posed to world champion P V Sindhu.
“There was a ban on eating ice creams on you during the 2016 Olympics, has another ban been imposed for Tokyo,” he asked a grinning Sindhu, who would be aiming to better the silver she won five years ago. “Sir, I have to be careful of my diet,” she responded. Modi called the athletes a reflection of new India said they look bold and confident ahead of the Games. He said all possible help has been extended to them through the Government’s target Olympic Podium Scheme (TOPS). “Don’t be bogged down by expectations, just give your best,” Modi said in the interaction. “I would have been happier to meet you in person, I always look forward to that. But I promise to spend time with you after you come back,” he said. “I am happy that country is cheering for you. I wish all the luck to you.
The whole country’s emotions are attached to you. “I find a few things common among you all, you are bold, confident and positive. That’s a common factor along with, discipline, dedication and determination. As the athletes are giving their all for India, Modi said the country should stand by them at all cost. Modi started the session by asking the athletes about their ambitions and challenges ahead of the sporting extravaganza. He asked Olympic bronze medallist and six-time world champion M C Mary Kom about her favourite athlete and favourite shot, and her reply was Muhammad Ali and the hook. Then he went to Rio Olympics silver medallist and reigning world champion Sindhu and her parents and praised them for the sacrifices they have made during the journey. To begin with, Modi spoke to archers Deepika Kumari and Pravin Jadhav and asked them not to feel the pressure of expectations at home. Modi told Deepika the nation is talking about her following her gold in the World Cup in Paris. “You’re world number 1 now. Your journey is very special,” he said. “My journey has been good from the beginning, I started with bamboo bow and then moved to modern bow gradually,” Deepika said. “There are expectations, but one expects the most from oneself. So, I am focusing on my practice and the way in which I will perform.”
The Olympics, in which on-site spectators will not be allowed owing to the COVID-19 pandemic, are scheduled to be held in the Japanese capital from July 23 to August 8. Newly-appointed Union Sports Minister Anurag Thakur and his Deputy Nisith Pramanik, Law Minister Kiren Rijiju, who was succeeded by Thakur, were also present during the interactive session. The PM said the people of India are cheering for their athletes to do well at the Olympics. Modi also praised the role played by the Government’s Khelo India initiative.